By Emily McConville and Zach Klonsinski

The University of Notre Dame reported $3.8 billion in “investments” in “Central America and the Caribbean” — more than a third of its total endowment pool — in its 2015 tax filings.

Those billions may not, however, be in that region at all.

Instead, University officials said, the money is invested in “pass-through entities,” which are legally incorporated in tax-friendly Caribbean countries. These entities then invest the funds worldwide.

Mark Krcmaric, managing director and chief operating officer of Notre Dame’s Investment Office, said most of the money reported to be invested in funds the Caribbean is ultimately invested in the United States; the rest is in “developed markets” such as Western European countries. Krcmaric added the breakdown is roughly 60 percent in the U.S. and 40 percent in foreign countries — he declined to go into further detail.

“[Universities] would actually be irresponsible if they were investing in private-equity funds and weren’t going through the Caribbean, just because of the way that the law is,” Brunson said.

Each year, the Notre Dame files a Form 990, a public-disclosure tax document all non-profit organizations must fill out. A section on overseas activities — Schedule F — includes the University’s spending in areas like study programs, research grants, fundraising and investments. In 2015, those investments included $3.86 billion in the Caribbean, more than $700 million in Europe and nearly $5 million each in the Middle East/North Africa and South America.

Many of those investments, especially those reported as in the Caribbean, start in “pass-through entities,” legally incorporated in that region but whose funds could be anywhere, Krcmaric said.

The IRS, however, only requires organizations to report the legal base of an investment.

“We have to fill [the Form 990] out,”  Krcmaric said. “It’s required, but it’s not actually all that informative.”

As tax-exempt organizations, Brunson said, universities do not have to pay taxes on regular income. They are taxed, however, on income unrelated to their missions, including returns on investments made with borrowed money. 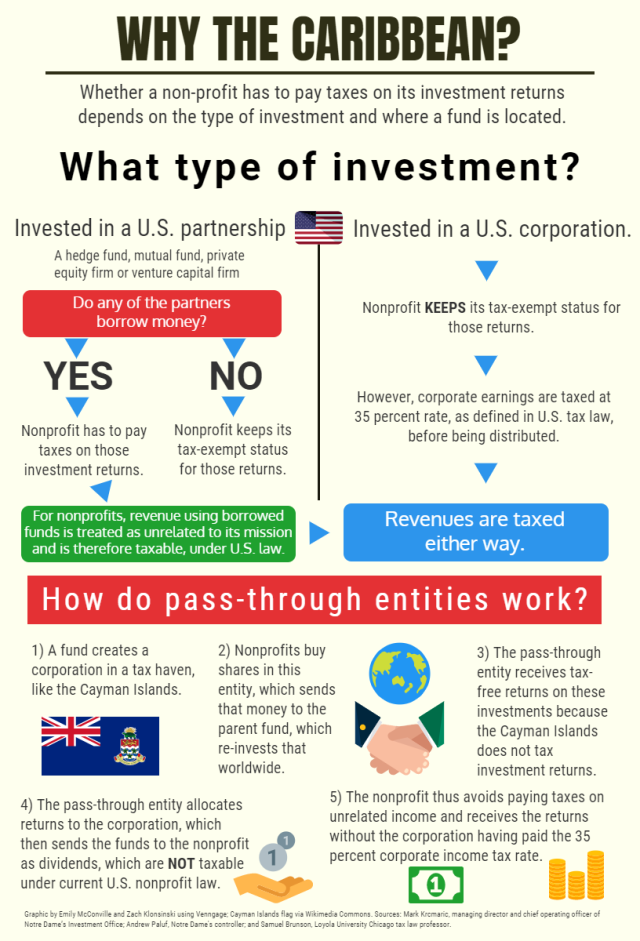 Private equity and hedge funds often borrow money to invest in or buy companies, Brunson said. These funds are classified as partnerships, which means any income the partnership makes is passed to the partners, who are individually taxed.

Nonprofits with large endowments or pension funds can stand to make a lot of money from such partnerships but want to avoid the unrelated income tax.

Brunson said fund managers will set up a corporation in which the nonprofit invests. Corporations themselves are taxed at 35 percent in the United States.

If you set a corporation up outside the U.S., however, it is not taxed in the same way. Every country has its own corporate tax regulations, and some barely tax this income — if at all.

Brunson said the Cayman Islands are particularly popular for this purpose.

Fund managers, then, will set up a so-called “pass-through” or “blocker” corporation in the Cayman Islands or elsewhere, and a university can invest in that corporation.

Because the nonprofit invested in a corporation, then, the returns can flow back to the organization untaxed.

Krcmaric added that the practice is so common that many fund managers now set up two parallel funds — one incorporated in the U.S. for all private investors (who are taxed regardless), and another fund specifically for nonprofits, with the exact same holdings, incorporated in the Caribbean.

Other universities have similar holdings in Central America and the Caribbean. Stanford, for example, reported almost $10 billion worth of investments in funds based in Central America and the Caribbean. Princeton ($6.1 billion), Columbia ($4.3 billion) and Yale ($2.3 billion), among others, also reported the majority of their overseas investments as residing in these funds.

Among the 22 private universities ranked at the top of U.S. News & World Report’s 2017 national rankings, 18 of them reported at least 70 percent of their total overseas investments as based in funds incorporated in Central America and the Caribbean.

MAP: Top 20 national universities and their reported investments in ‘central america and the caribbean’

Universities were not always required to disclose investments outside the U.S., nor did they have to report overall activities outside the U.S. in much detail, said Richard Klee, the tax director in Notre Dame’s Office of the Controller, which is responsible for compiling the University’s financial statements.

Klee said the IRS beefed up the Form 990 in 2008, and it took several years after that for the IRS’ instructions and the University’s practices to take their current form.

Investments reported in Central America and the Caribbean do not appear on Notre Dame’s filings until 2011, though University controller Andrew Paluf said Notre Dame had had those investments before.

Even now, Klee said the way those expenditures are reported might not be consistent from institution to institution, with many decisions about how to classify activities and expenditures left up to the universities themselves.

“It really has evolved that way, and you still end up with things like [Schedule] F that have like four or five different approaches to things they’re trying to capture,” Klee said.

In terms of overall reporting of activities outside the U.S., Notre Dame’s disclosures are relatively detailed and accurate — Paluf called a recent two-and-a-half-year-long IRS audit an “affirmation process.”

“At the end of the day, there wasn’t anything we had to do differently,” Paluf said.

Regardless of where the investments start, Krcmaric said Notre Dame carefully tracks where its investment dollars go. It also follows investment guidelines set by the United States Conference of Catholic Bishops — meaning no investments in activities that have to do with abortion, stem cell research or anything that does not follow Catholic Social Teaching, which is the Church’s doctrines on issues of social justice, human dignity and the common good.

To follow these guidelines, Krcmaric said the Investment Office carefully monitors individual companies and funds and makes it clear to them where it wants its investment dollars to go.

“They know what we’re after,” he said.

Investment funds around the world reported in the 2015 Form 990 represent the vast majority of Notre Dame’s total overseas activities, which totals about $5.19 billion. The remaining $56 million supports Notre Dame’s actual presence in other countries, which is itself increasing.

Most regions have reported “investment operations,” which are “investment management fees charged to the University by foreign investments,” Klee said in a follow-up email. Other Schedule F entries — “fundraising” and “program services” such as “instruction,” “research” and “auxiliary enterprise” — have to do with the University’s increasing presence abroad.

In the past five years, Notre Dame has opened Global Gateways in Rome and Beijing as well as several smaller centers, which host study-abroad students in addition to visiting scholars and academic events.

Paluf said expenditures reported under “program services” or “instruction” support those activities. The money could be spent in the regions themselves or elsewhere.

“Each of those specific locations are actually trying to do more than just send our students over there,” Paluf said. “They’re trying to use those Global Gateways as an opportunity to promote Notre Dame across the world.”

I am a newswriter at Bates College and recent graduate of the University of Notre Dame. I have experience in news and feature writing as well as press releases and other copywriting.

In the “Clips” section are examples of my work. Please enjoy, don’t hesitate to leave comments or constructive criticism, and feel free to get in touch if you want me to do something for you.